According to Bubba's Notice of Separation from U.S. Naval Service, dated 2 January 1946, he received the Asiatic-Pacific 1 star, the Philippine Liberation 1 star, the Victory Medal and the American Theatre [sic]. After researching these medals online and discovering that they were ribbons, I realized that they can be seen on Bubba's uniform: 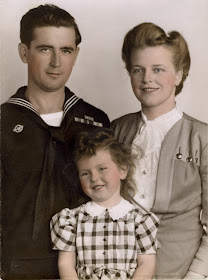 Here is a closeup of the ribbons: 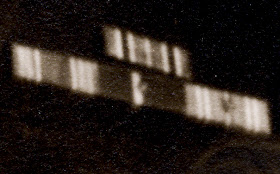 Wikipedia should not be used as a reliable source for information, but as a good source for clues. Images of all of Bubba's medals can be see in online shops, but I wanted images I could use on my blog and I found them on Wikipedia. These images are free to use via Wikimedia Commons, which indicates that these images are in the public domain.

Two of Bubba's ribbons, which are medals for specific campaigns, each have one star, which can just be made out on the photo above.

Here is the closeup again of the ribbons on Bubba's uniform:

And here are the ribbons his service record says that he was awarded:

I think we have a match. What do you think?
For a more reliable source of information about Navy medals, I was hoping to consult the book, Complete Guide to United States Navy Medals, Badges and Insignia: World War II to Present

, but according to WorldCat, the closest library is in Buffalo, New York. Too far to go before the kids get out of school. May just have to order it.
Happy Monday, I mean Tuesday! Where has the week gone?
Scrappy Gen
Let's Remember!
Jennifer Shoer
Share