Fishing Friday - 52 Ancestors - Where WAS she born?

This challenge 52 Ancestors in 52 Weeks is provided by Amy Johnson Crow of No Story Too Small  (Don't you just love that title?). I am jumping in on week three, which will be my week one, but I am ommitting the number count in my title so as not to confuse anyone...or me. Thank you, Amy, for this challenge. Weekly recaps by Amy can be read here.

As a bonus, because I am the Scrappy Genealogist, each of my posts will include a heritage page featuring my ancestor. Hope you enjoy them! Wondering about the Fishing Friday title? That's fishing for family Friday.

Where WAS she born?
Mabelle Georgianna Manderson (Hill) Burrell 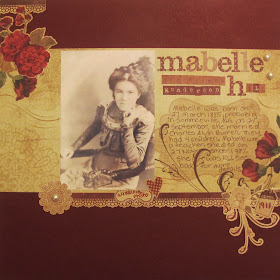 My great grandmother, Mabelle, was said to have been born in England. Her birth record for 27 March 1885 from Somerville, Massachusetts provides a different picture.1

She is registered as having been born in Somerville, however, the earliest passenger record I have found to date shows that her father, William McPhearson Hill, arrived at Boston on the Ship Cephalonia on 25 May 1885. Ports of departure were Queenstown, Ireland and Liverpool. Ireland is reported as his native country.2

Mabelle arrives three months later at Boston on 29 August 1885 with her mother, Anna Hammond (Connor) Hill, and her sister, Ethel Florence Wilhelmina. If the Somerville birth record is correct, she should be about five months old, but she is reported to be two years old. Additionally she is reported as a native of the U.S.A. as is her sister. Her mother is reported to be of England. Ethel is reported to be 5 years old. Her sister's date of birth is accurate according to the certified entry of birth I received showing Ethel was born 20 October 1879 in Belfast, Northern Ireland.3

I have not found an arrival yet for Anna before Mabelle's birth record dated 1885 in Somerville. I have also not found a birth record for her in Northern Ireland. I did find a record of her parents' marriage in Ballinderrry, Antrim, Northern Ireland.4 At least part of the information contained in the females' 1885 passenger record is known to be false. Ethel was not born in the U.S.A. and William’s naturalization did not become final until 20 Feb 1899.5 Was Mabelle's age falsely reported as well? Was she born in Sommerville or England or Northern Ireland? I will continue to search for more evidence before I make a final determination. Wherever she was born, Mabelle stuck to the birth date of 27 March 1885 throughout her life and we celebrated her 100th birth on that date in 1985.6

Mabelle grew up in Revere living at 162 Harrington Street7 and later at 95 Reservoir Avenue.8 She graduated from Revere High School in 1905. In 1907 she graduated from Wheelock College and began working as a teacher.9

On 24 September 1911 she married Charles Alvin Burrell. She was working at the Shurtleff School in Revere. They were married at her home on Reservoir Avenue. The officiate was Rev Walter S Eaton, who had been the pastor of the First Congregational Church in Revere.10

After their marriage Mabelle and Charles lived with her parents on Reservoir Avenue.11 They later moved to Watertown12 and finally settled in Foxborough, Massachusetts.13  Together they raised four children; Barbara (my grandmother), Thelma, Charles and Constance.14

Mabelle kept very busy throughout her life. She had a wonderful sense of humor. After her children were grown she returned to teaching and substitute teaching and worked into her eighties. She served as both teacher (my father was one of her students) and principal of the Pratt School in East Foxborough. After her retirement an elementary school in Foxborough was named for her and is today called the Mabelle M. Burrell Elementary School. Her picture hangs proudly in the front foyer.15

At the time of her death on 27 Nov 1987, Mabelle had lived over 102 years. She lived at home until almost the age of 100. She had many friends and hobbies and belonged to many organizations including the Order of the Eastern Star and the Bethany Congregational Church.16 She loved playing cards and scrapbooking old greeting cards into books which she donated to various organizations. I particularly loved that she always had a jar of candy on her coffee table. She had a great laugh and I can still hear her deep chuckle.

For details on sources used, email me at jshoer [at] reconnectingrelatives [dot] com.